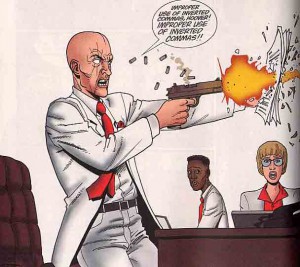 When I referee an article I rarely comment on the grammar or the choice of words. Most authors are not native English speakers and as long as the language is not so spectacularly bad that it makes it hard to understand the meaning I usually don’t mention it. I especially don’t bother about typos*. In my opinion that is not the referee’s job but the editor’s.

Not everyone agrees. It seems to be quite common to throw in a hackneyed “English needs to be improved” in the end of the review. I guess it’s meant to give the impression you actually read the manuscript. I have even gotten reviews were the referee has basically proofread the whole manuscript and had opinions on style (that I did not share). My Scottish phd-supervisor once furiously denounced a referee as a “fucking American” after being told in the review that she should consult a native speaker for proofreading.

Something similar happened to me yesterday. I got a review back on a manuscript submitted last month with the comment “English should be improved significantly.” The referee was also kind enough to give an example of our atrocious abuse of his (or her) sensitive grammar instinct.

Unforgivable! Missing comma AND a typo! Furthermore, one of my co-authors, who did proofread the manuscript, is Irish. Obviously the Scottish and Irish should stick to their own ancient tongues and not sully the proud English language.

* I make tons of them. I sympathise.