Skip to content
Home » Blog » English » Science on the cheap

This post started out as a personal rant, but it also says something important about the state of science in Poland.

Today the results of the latest application round for grants from the Polish National Science Centre (NCN) were announced. I have for some time that my application was not funded. It was thrown out in the first round. That’s ok, and with a success rate of 14% it’s clear that not everyone will get money. It is the reason that really ticked me off.

When I started reading the opinion from the expert panel it looked good: “The PI is a very good scientist…“, “The project is very good…” “The application is excellent, with clear goals and hypotheses…” In the summary under the headline weak points, the two reviewers wrote (in full): “The application has no weak points.” and “In my opinion there are no noticeable weak points”, but still… no money.

Why? I asked for too high salary. It’s written clearly in the opinion that the payment to the PI and a postdoc were too high. I applied for the maximum amount given in the instructions from NCN, which is 5000 PLN + overhead per month before tax . Since I was planning to work 70% of my time for this project that amounts to 3500 PLN per month or about 840 EUR. This, the expert panel (NB not the reviewers) thought was too much.

To put it in perspective. I now (without pay from projects) earn quite a bit less than the average salary in Poland, which is 3650 PLN (880 EUR). The money from the grant would put me above the national average, but still below the median pay in Warsaw (6000 PLN). My brother used to ask why I spent ten years in university (it was a long time ago) to earn less than someone working at McDonald’s. Well, it’s a relevant question. Even more so when it comes to the pay of PhD students. If they don’t get paid my a grant, they will have a salary that is hard to live on in Warsaw. A PhD student practically must share flats with someone or live in a dormitory. Otherwise there is no way to survive. That goes a long way to explain why the best students move abroad, and why recruiting new grad students frequently involves taking whoever is willing.

When it comes to paying for science, Poland is found at the lower end among the EU countries with a paltry 0.9% of GDP going to R&D according to Eurostat. 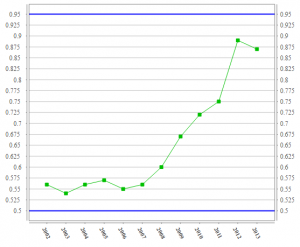 The government under PM Ewa Kopacz has said that it’s goal is that by 2020 the spending should be 2% of GDP, which would put Poland on par with countries like the Netherlands and the Czech Republic.* The amount has increased over the years, mainly due to Poland joining the EU. In the latest budget for 2015 the increase in spending on research was ca. 10% compared to 2014, still far off what is needed to reach the 2% target. But as everyone from farmers and miners to nurses and firemen are threatening with strikes to get more money from the state, the prospect of a significant increase in science spending seems remote. Unfortunately Poland will continue to play in the second science league and see the best young players go to the elite clubs in the west for some time yet. Although there are pockets of excellence in Polish science the fact that zero (0!) ERC starting grants went to Poland this year does not bode well for the future.

As for me, I have another application in for the present round and consider what to do with my “excellent” (but rejected) application. So far my success rate in NCN applications has been 50%, so maybe there is still some hope. I’ll give it another year or two…

*Why Poland spends so much less than e.g. the Czech republic and Estonia is a legacy of the socialist time, the war and on the fact that Poland was a country of farming, mining and heavy industry with little basic science. A nice article in Nature on the topic was published last year.

One thought on “Science on the cheap”