Skip to content
Home » Blog » English » I, the hypocrite 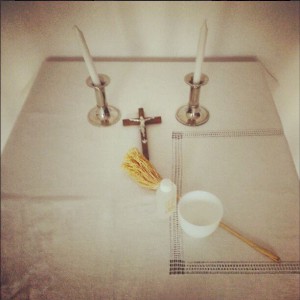 Yesterday I lied to a priest. I did it to avoid an argument, and I felt bad about it. Not because I was lying to a priest, but because I felt the need to lie. I’m an atheist, and I never had any problems with saying so, or even vocally arguing about it. Until I moved to Poland. It’s one thing being atheist in a secular country like Sweden – no one thinks twice about it. In fact, if you admit you’re religious you are a bit strange. But here… it’s different. Not at work. We’re scientist, educated, and many, if not most, of us are non-believers in various degrees. But in the village where Mrs MJN’s wife’s family comes from… It’s different. While some people might not go to church regularly, everyone is catholic – without a doubt. Professing to atheism will usually cause arguments and generally bad vibes. So, mostly I just avoid the issue.

But yesterday, in Warsaw, I felt the need to lie to the priest. He made his yearly round in the congregation, the so-called kolenda, knocking on the doors, trying to figure out who is going to church or not. Mrs MJN invited him in to the prepared table. And, inevitably, I was asked about my going to church. So I lied. Instead of saying that I find the idea of religion rather incomprehensible and that I have never been to mass, I used the getaway card that is being protestant. It’s still Christian enough not to cause a fuss, but of course I would not go to the catholic church.

Why did I do it? Because I didn’t need the argument. The son was just going to sleep. Mrs MJN does not want to completely cut the ties to the church so she retains the inborn respect for the clergy.

Afterwards, I came to think about a talk I had with a woman in Tehran last year. She said that she would mention her non-belief only in the company of people she knows well and trusts. While Poland and Iran are two completely different societies (atheism here amounts to nothing worse than some social discomfort) I had an understanding for the feeling I had never had if only living in Sweden. (Or for that matter, Germany and France). The tip-toeing around a topic trying not to provoke questions.