The results of the latest yearly bicycling measurements (Warszawski Pomiar Ruchu Rowerowego 2016) were just presented. During several days in the beginning of June the number of bicyclists passing by some 50-odd places in Warsaw were counted and catalogued.

Since this is a set of measurements that have been repeated for a number of years we can immediately see that the number of bicyclists has increased dramatically since 2009. I’ve written about this before (in Swedish). When I started working here in 2007 I was almost alone in cycling to work. Now, if the weather is nice*, the bike lanes are full. This is connected with the emergence of better infrastructure, as has been seen also in e.g London. I can now cycle on bike-roads and -lanes almost the whole way from home to work. A few years ago such a trip still required getting out among the cars in many places. 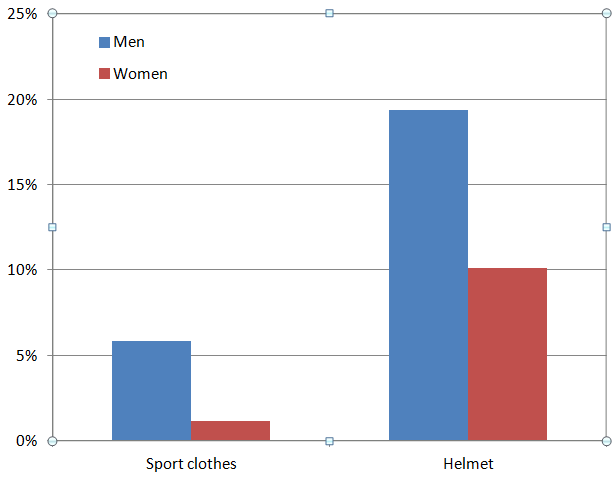 The frequency of cyclists wearing “sport clothes” and helmet on Plac Konstytucji.

Other interesting tidbits that one can find is that around one third of cyclists are women. This has increased from only about a fifth in 2009. This, it is said, is also connected to an improvement in bicycle infrastructure. About 20% of cyclists are wearing helmets, and 15% “sports clothes”. Looking into the raw data, one can see that much more men than women wear helmet, and about 10 times as many men as women are dressed in sports clothes. (The diagram shows the data for Plac Konstytucji. The frequencies are not quite representative, but the gender ratios are similar to other locations.) There is no age-related info, so no conclusions about the number of Mamils can be drawn.

I’m happy for all news about more cyclists (hopefully in combination with fewer drivers), so I’m keeping fingers crossed that the trend will continue, even if it has slowed down the last couple of years.