Skip to content
Home » Blog » English » Are Poles really that good in English? 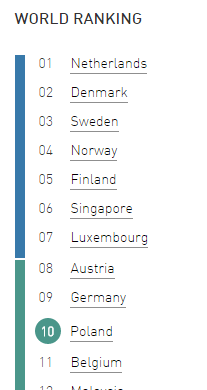 English proficiency ranking according to EF.

Every year when EF, a company specialising in private English instruction, publishes its “English Proficiency Index” we get a host of press reports enthusing about how high Poland (or Sweden) is ranked. This year, Poland is on tenth place in the world, and Sweden on third.

But is it true? Anyone who has tried travelling in Poland, outside the major cities, might feel somewhat sceptic. The EF English Proficiency Index is based on tests taken by people who are interested in improving their English by paying for a private course. I’m not surprised that Poland scores high in this segment. The ambitious part of the population is often both well-educated and willing to seek their fortunes abroad. But, as EF themselves write on their webpage about the tests:

[T]he sample of test takers for the EF English Proficiency Index is biased towards respondents who are interested in pursuing language study […] Because respondents are motivated to take the test by their interest in learning English, the sample should consist primarily of working-aged adults, with a bias towards students and people at the beginning of their careers. […] We recognize that the test-taking population represented in this index is self-selected and not guaranteed to be representative of the country as a whole.

EF recognises that, but obviously not the media… It’s maybe not a very important issue, but it’s sad that even the most rudimentary control of the sources is so often missing.

So, what about the English proficiency in Poland?

I don’t know. I haven’t been able to find some independent comparison between countries. But in my experience, unless you talk with younger people in the bigger cities, English ain’t gonna get you nowhere…