Skip to content
Home » Blog » English » What are the rest of you doing?

This week our institute is arranging its yearly Microsymposium* where all the scientists get to show the others, through talks or posters, what they have been doing during the year. I always have a bit of mixed feelings about this kind of arrangements. One one hand it feels like a waste of time. It’s not like there are no other things to do after Christmas with yearly reports and the like. And much of what is shown has no relevance to my research. On the other hand, it’s nice to know what other people in the institute are doing, and often I do find something that I can use in my own research.

Unfortunately this internal communication thing is hard and doesn’t always work very well. And not only here; it was the same in the other places I have worked. Often I didn’t know what the people in the next corridor was doing, never mind in the next building. In an article in Chemistry World (Building better chemistry, unfortunately paywalled) I read about the effort of trying to build away the problem when designing new laboratories. By constructing building with common areas that encourage meetings between scientist from different groups the architects wants to start all the trivial and important conversations that lead to new ideas and contacts. 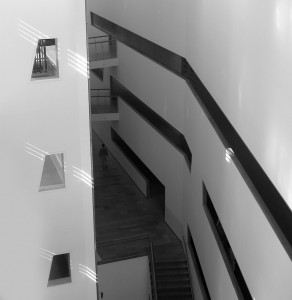 The “Canyon” at MC2 at Chalmers.

Similarly to many of the building described in the Chemistry World article the (then) new microelectronics centre at Chalmers in Göteborg, Sweden, was also constructed with a large central atrium with sitting areas and whiteboards to encourage spontaneous meetings. I don’t know if it helped; I rarely saw anyone using the areas. But if buildings might encourage contact it is for sure that they can discourage them too. Our institute is divided between four different buildings. We are sharing our building, which is quite old, with the laser lab. The empty corridor with closed doors does not invite to any kind of interaction. Without a central common area we rarely see researchers from the other groups.

So, I guess the microsymposium isn’t such a terrible idea. All in all there is one day of oral presentations followed by two poster sessions with some hundred posters. I’ll be giving a talk presenting the results from this paper. My slides can be found here if anyone is interested.

How is it at other places? Do you have any especially good or atrocious examples of building design – for science or other purposes.

* Not so micro, though. It goes on for three days!

PS This was in large parts a re-write of a post in Swedish from two years back.