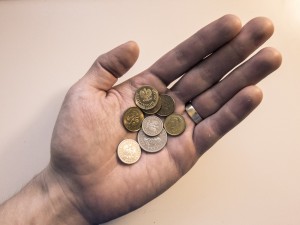 o here we go again… Another post about the state of pay for Polish scientists. This time it’s not as personal a rant as last time, at least not yet.

When it comes to paying scientists there are basically two competing models; either you have a fixed pay from your institution, and grant money is used to pay for equipment, student salaries, etc.; or you have a small “guarantee salary” from the institution and pay yourself from your grants to top up the income. The former model was used at my previous jobs in Sweden and France. The latter is used at our institute. The idea is that this should motivate researchers to apply for grants, bring in money to the institute, do good research to get the next grant… and so on. And it kind of works, at least if compared to some of the institutions in Warsaw using the fixed pay model, where the mentality from the socialist times still are in the walls “take your money and don’t give a damn – you can’t change it anyway.”

Now the National Science Centre (NCN), the biggest finances of basic research in Poland, has thrown a spanner in that wheel. In their latest regulations for salaries a project leader (for an OPUS – professor’s level grant) can be paid at the most ca 2100 PLN (500€) from a grant in addition to the institute pay. But the real hurt is born by younger scientists. A research fellow or postdoc can get an addition of a mere 1250 PLN*, and this on a salary that is far below the national median to start with. So, newly minted doctors can either get paid less than a shop clerk or leave the country or academia.

And of course PhD students have it even worse. As I wrote last time, a student salary is really hard to live on Warsaw, unless you get paid by a grant. With the new rules this extra money is limited to a paltry 840 PLN (ca 210 €). My students are lucky in that I got a grant in the last round under the old rules, so I can pay them at least a bit more.

I have not seen any explanation from NCN for these new rules, but I guess it is a wish to move away from the system where researcher divide their time between as many different projects as they can to earn some extra. I would agree with a system with higher guarantee salaries and a cap on extra grant pay, but when the cap is introduced before there is any indication of more money for salaries it gives the wrong signals.

* This is the limit for Sonata grants, which are available up to 7 years after PhD.