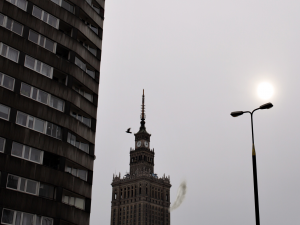 So, we finally have a new director… or, at least we think we do. There was some uncertainty about the colour of the smoke at the conclave at the Polish Academy of Sciences Friday two weeks ago, and still there is no official information. Like the laws and sausages that Bismarck never talked about, it’s better not to know how directors are being made. Not that anyone really does know… the process of appointing a director at PAS makes the election of a pope seem like a model of transparency. So the rumour mill, which seems to have turned into the official source of information, is running wild. The consensus now leans towards that it is my former post-doc supervisor who is our new supreme leader. I’m not going to speculate about whether he will be a good boss or not; time will tell.

But really… officially we don’t even know who applied. And even less what they intend with the institute, as no one, except our previous director, had announced neither candidature nor a programme. At least they could have afforded us the courtesy of telling us  what they plan for us. But, hey, we only work here.

What we do know is that the last attempt of appointing the director ended in the process being cancelled and the position advertised again. The rumour mill went crazy; court cases, more or less open threats, and masonic rituals are said to have been part of the process. (Ok, maybe the last was not on the list… but would it surprise anyone?) Out went any remaining naïve notions of the academia as a meritocracy. The only thing that seems to be clear is that the appointment has almost nothing to do with qualifications, morals, or competence, and everything to do with surviving vicious back-stabbing and back-room dealings. (However, considering the ever tougher fights for funding, maybe that’s the kind of person we need. Screw science, go for a politician.)

Now, almost two weeks since the decision was purportedly taken, a kind of indifference has set in. If Belgium could go on for a year and half without a government, who needs a director? We hunker down and keep doing what we do. When the official appointment finally comes, well… who lives will see. As long as possible; screw the politicians and keep doing science.