Skip to content
Home » Blog » Svenska » About those cartoons…

To show or not to show, that is the question.

Flags are burning, goods boycotted, embassies occupied, all while the western press forcefully defends the freedom of speech and the freedom of the press. So who’s right, the enrages masses of muslins around the world or the enraged masses of presseditors around … six or seven newspapers in Europe?

To start with I of course celebrate the right of the press to publish (almost) whatever they want, and the calls for the Danish government to interfere is of course ridiculous. On the other hand, some of the now infamous cartoons has a flavour of islamophobia, and publication of those images as a freedom-of-speech argument is somewhat clumsy. The sensible thing would have been to deprive protesters of the “hate-argument” by publishing images that would be objectionable solely on the ground of religious conviction. That would have refined the discussion to its basics.

Seeing that Jylland-posten has a very limited circulation in Saudi-Arabia it is obvious that the outrage in the muslim world is not caused by strong feeling of insult from these cartoons. Most people, I’m sure, haven’t even seen them, as little as they read that Newsweek article about flushing the Koran. That time 14 people died in the protests. Insane! It’s a bloody book! Likewise, how many read the satanic verses? But everybody knows its blasphemous. Obviously someone is using the “muslim outrage” for their own purposes. It’s not hard to figure out that Hamas is delighted that Palestinians are burning Danish flags instead of wondering why they can’t get their salaries.

The bottom line is that religion should not have an impact on the secular society! Laws should be religiously neutral. What is not allowed without religious motives should not be allowed with them. If you’re muslim and don’t want pictures of God or the prophet, fine, but I’m not, and I have every right to paint him in bright colours on ten metre canvas. Please, poke fun of Jesus or Buddha or Darwin, for that matter, I’ll support your right to do it. If the muslims are genuinely upset about these images and boycott Danish milk, that’s their choice. I’m fine with it. But threatening people or demanding us to conform to your religious rules? No way!

Here are the six cartoons published by Die Welt: 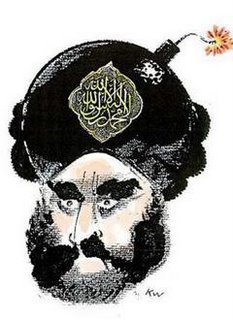 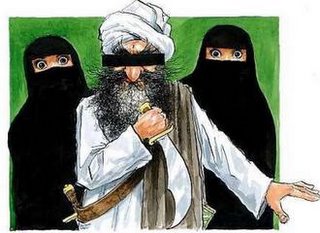 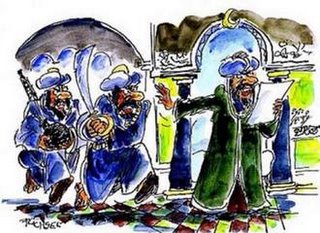 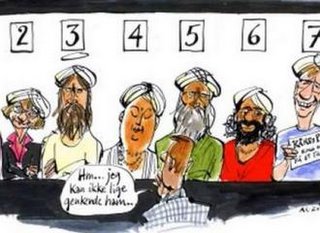 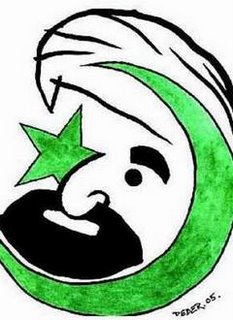 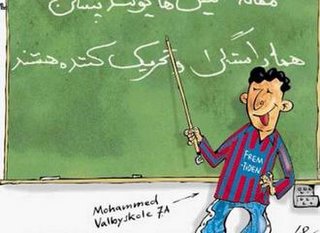