Yesterday we saw how a normal glass of water contains at least 20000 molecules of water that were in the blood of Socrates when he died. Here, we’ll see why that is completely wrong! 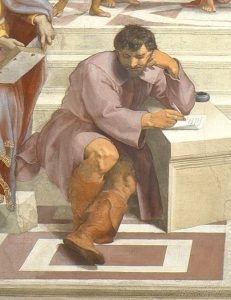 Heraclitus in Rafael’s School of Athens.

You might think it has something to do with the way we estimated the circulation of water in the seas, or some other technicality that could easily1 be corrected. But that would be a rather boring type of error – a difference of a few orders of magnitude here or there doesn’t really make any difference – from a fundamental point of view. A more interesting type of mistake is the one that completely changes the way you need to think about the question.

Regardless of the majestic calmness and eternity of the oceans, where the wildest hurricanes are mere transient ripples above the still deeps, Heraclitus was exactly right when he proclaimed that “You could not step twice into the same river.” Although we from childhood know that water is H2O, the water molecule itself is a rather ephemeral entity. In reality the Mickey Mouse-shaped molecule we all know is constantly exchanging ears with neighbouring mice. Water is not so much a collection of H2Os as a delicate balance between it and the positive H3O+ and negative OH– ions: H2O + H2O ⇌ H3O+ + OH–. The lifetime of those ions are very fleeting indeed, a few picoseconds2 at most, but the very existence of this dance has profound consequences.

The amount of this self-ionisation is small – at a given time only a few molecules of either ion exist for every thousand million H2Os. But this is the basis of why we say that a neutral solution has pH 7. The pH value is defined such that there are 10-pH mol H+ ions (in this case in the form of H3O+) per litre of a solution. In pure water, where there is a balance between H3O+ and OH–, those few ions per billon waters correspond precisely to 10-7 moles of H3O+ per litre water.

The presence of a small amount of ions in even the purest of pure water also means that it will always conduct a small amount of electricity. The protons is the water ions can quickly be transferred along fugacious rings and chains of water molecules that are constantly forming between neighbouring molecules and are breaking apart in a matter of picoseconds. This form of conductivity though water was, incredibly, deduced more than 200 years ago (in 1809, only a few years after Volta constructed the first battery) by the German chemist Theodor von Grotthuß. Now, having been somewhat refined by modern technologies such as NMR and molecular dynamics calculations, it is known as the Grotthuss mechanism, and it limits the resistivity of the most assiduously purified water to 18 MΩ·cm.

And finally, the exchange of protons from one water molecule to another reduces the amount of Socratic blood in our glass to exactly zero. The proton exchange is relatively rare, but once or twice or so every day a given molecule is caught up in this dance, after which we can’t really call it the same molecule anymore. So if the lifetime of an H2O is about a day, we can safely say that after 2000 years, not a single one of the original molecules are left.

Tomorrow we’ll have a final look at this problem, and see why even today’s answer is completely wrong.