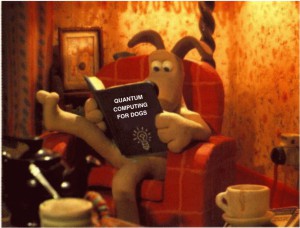 There’s something sad about that Trudeau-video we’re all liking now. I mean it’s a cool retort to a slightly snarky joke, but while his quantum-computer explanation was …kinda correct… it wasn’t really anything to gush over. It was more or less like “Hamlet is about a prince in a castle… oh, and there’s a skull too.” The kind of explanation anyone who has opened the science pages in their daily newspaper should be able to give.

I don’t want this to sound like I’m deriding Trudeau; he did good. The sad part is that we get impressed by even this basic knowledge of science by a politician. Isn’t this the kind of things we should take for granted that the leader of a technologically advanced nation should have at least an inkling about. Instead, we act like it’s something completely unprecedented that a politician knows anything about modern science. Shouldn’t we really hold our politicians to higher standards?

If anything, quantum-Trudeau is a sign that The Two Cultures are still alive and well. Or does anyone think that the reporter would have started his question by joking “I was going to ask you to explain Mrs Dalloway…”