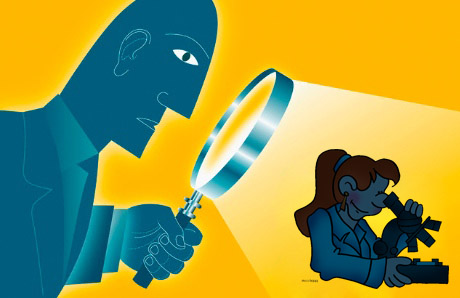 As anyone who has been following the situation in Poland over the last year knows, the government has centralised control over media (now the head of state media is appointed by the minister of culture), the constitutional court (well, they basically castrated it), the prosecutors (the minister of justice was made supreme prosecutor), state companies, and more. PiS clearly wants to centralise power to the government (or really, to Kaczyński).

Now the time has come for science. In a law that was passed in the infamous “sala kolumnowa” vote the minister of science and higher education was given direct power to appoint (and sack) directors and vice directors of research institutes in Poland. Interestingly the law also removed the demand the the director should be able to communicate in English, German or French.

A further step was to change the composition of the institutes’ scientific councils, which are advising the director on institute policy, give opinion on hiring research group leaders, and are also responsible for awarding phd’s. Previously 30-40% of the members of the council came from outside the institute and at least 50% from the scientific staff of the institute. These proportions are now reversed. The law was also changed so that the chairperson of the council can only be elected among members appointed directly by the minister. Additionally, the law relaxed the demand that the chair has a dr hab. title, i.e. has achieved status as an independent researcher. Now only a phd is required. All in all this means that both the director and the head of the scientific council of all research institutes in Poland will be directly appointed by the government.

PiS is creating a country where more and more power is centralised to the government. Where anyone can lose their position at the whim of the minister. For being vehemently anti-communist, PiS sure seem to think that PZPR is a great organisational role model.

EDIT: This does not (yet) apply the institutes of the Polish Academy of Sciences (for example the institute I work in). These are governed by a different law.