Skip to content
Home » Blog » English » Are there women in electrochemistry? 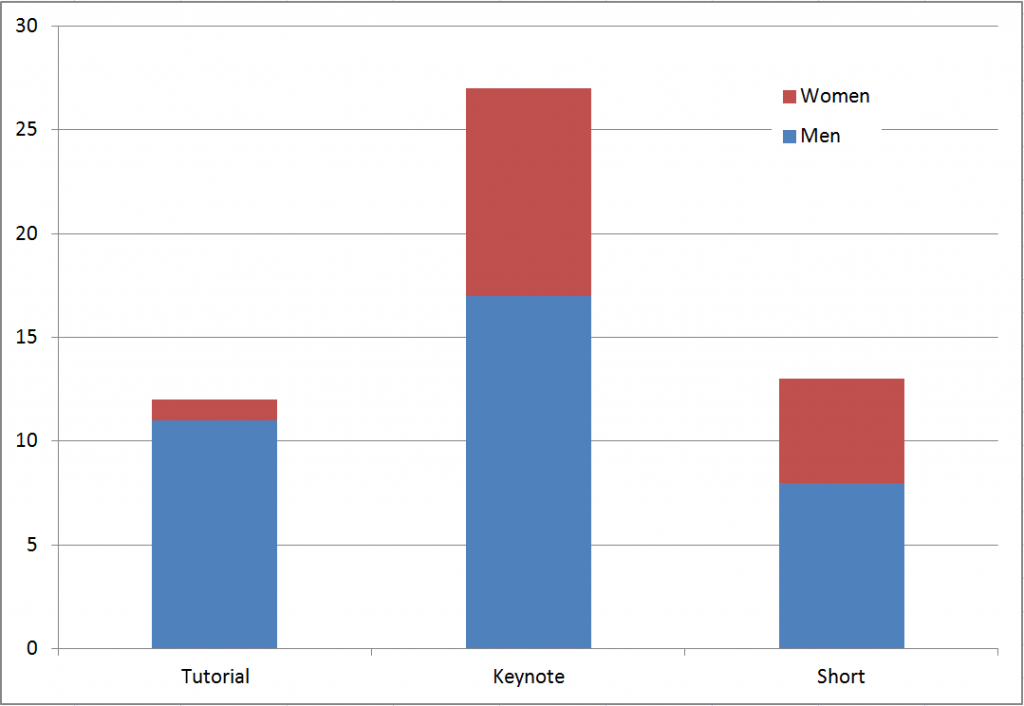 Speakers at the SMCBS meeting 2015. The most prestigious spot is the 40 min Tutorial lecture, followed by the 20 min Keynote and 15 minute short communication.

I was recently visiting a workshop on surface modification (SMCBS) that is organised every other year by people from our institute. Looking around the room I realised that the audience was about half men and half women.* However, despite the almost equal representation of genders among the conference participants most of the speakers were men. For the longest, most prestigious talks, the “tutorials”, only one woman was among the 12 speakers, and in total less than a third of the speakers were women. I’m sure the organisers didn’t do this intentionally, but seeing that the advisory board is 8 men and one woman, it’s not surprising. The problem is rather that they didn’t not do it intentionally.

Distribution of ISE Fellows. Is this really the way it should look?

Unfortunately this is an all too common theme in science – there are plenty of women among the footsoldiers, but the higher we look up the rank the more homogeneous the picture gets. I recently got a reminder that it’s time to nominate fellows of the International Society of Electrochemistry. The list of present fellows comprises 70 men and only 2 women. I find it hard to believe that there are 35 times as many men as women who deserve “recognition [for] their scientific or technical contributions to the field of electrochemistry”. The nomination committee, by the way, consists of five male professors. Next year it is expanded to six members, with Elena Savinova coming in as the only woman. [UPDATED Figures after initiations in 2020 are 98 fellows – 7 women.]

Also the Royal Society of Chemistry’s Electrochemistry division is looking for nominees for their Faraday and Barker medals**. Here the result is even more striking – not a single woman has ever been awarded either medal.

I refuse to believe that there are so few women electrochemists who are worthy of awards. And if that is so, we need to look for the reason elsewhere. One of the biggest problems, as has been shown again and again, is that we all have our unconscious biases – scientists are men. Even the most well-intended committee will fail if they are not aware of this. Because, the good news is that we can do something about our biases – by actually being aware of them. (Try yourself with the Harvard Implicit Association test.) I am trying hard to do this every day at work. Lets hope that the ISE and RSC committees also do and that we will see more women ISE fellows and RSC medal winners this time around.

* The actual count was 65 men and 55 women, according to the list of participants. This actually didn’t surprise me very much since it’s a bioelectrochemistry event, and as administrator of the Facebook page of the Bioelectrochemistry division of the International Society of Electrochemisty I noticed last year that the “likes” were equally divided between men and women. Unfortunately this has changed recently with a large influx of likes from India and Egypt. Now the distribution is more like 2 men to every woman. The same is true for the main ISE Facebook page.

** The Faraday medal is awarded to an “electrochemist working outside the UK and Ireland in recognition of their outstanding original contributions and innovation as a mid career researcher in any field of electrochemistry” and the Barker medal to a chemist in the UK or Ireland. Interestingly, Alan Bond has managed to get both medals.